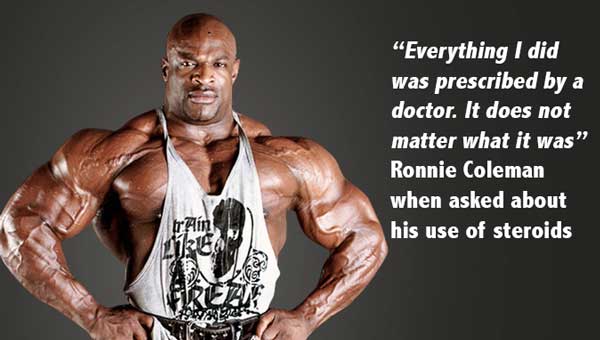 WATCH: Ronnie Coleman’s controversial comments about his steroid use.

Ronnie Coleman is a bodybuilding legend. There is no denying this.

The 8X Mr. Olympia winner has been labeled one of the greatest bodybuilders of all time. And he deserves this label 100%

In his interview, Ronnie Coleman was asked numerous questions about his career by Patrick.

As with every legendary bodybuilder, the subject of steroid use discussed during the interview.

In this interview, Ronnie’s answers raised some eyebrows in regards to his use of steroids.

Here are some of the questions by Patrick and answers by Ronnie Coleman:

Patrick: Do you think the subject of using steroids was kept under the table when you were competing compared to today being discussed openly.

Patrick: Do you think it is a good thing to make steroids commercialized?

Patrick: So, we have to be comfortable to say everybody is taking something competing at that level.

Patrick: As with cigarettes and Alcohol, the users know that these can cause serious physical damage if abused, do you think the same approach should be followed for steroids? Should the user be the one responsible for his or her actions?

This is where it gets interesting

Patrick: If you were on the board of the Mr. Olympia to revive the brand, what is your approach?

Ronnie: Well, I think it would be a lot better. Everything I did was prescribed by a doctor. I had doctors making sure everything was ok.

Patrick: Everything you used was always prescribed?

Patrick: Does not matter what is was?

Ronnie: It did not matter. You know, the DEA came in and started asking questions like what are you doing and what are you taking? and I had to be upfront. You know, I just followed the rules.

So I went and called my doctor and got the prescriptions for everything I take. As I said, the DEA was monitoring everything and I made sure I did my checkups. I followed protocol and did it the right way. Look at what I went through, i am still doing fine and doing great other than the bad back surgeries I went through.

I was not buying things of the streets, I was not getting black market stuff, not knowing what I was getting, I was doing everything the right way. Everything I was getting was from the pharmacy getting prescribed by a doctor. the doctors were keeping up with my progress and taking blood samples regularly.

I think if it is done that way, everybody can benefit. The sport is not controlled in that kind of way.

I did it that was because it was the right way to do it. The DEA brought us all in after we did that controversial interview with Tom Platz.

Patrick: So if you were competing today you can talk openly about steroid use?

Ronnie: Yeah, that is correct. People think I was doing way more than I was actually doing. I was doing the same thing everybody else was doing.

Patrick: Where you doing more than your peers?

Ronnie: I think we were all on the same level. There is only so much you can do for it to be effective. If you see the baseball players that took steroids, they look normal, it all goes down to genetics. You have to be genetically gifted to do certain things. I could not play baseball, basketball or football nether. But I could be a pretty good bodybuilder.

At the same time, Ronnie admits during the interview that in 2001 that he felt he was going to die. He said he felt awful and could not walk. He said the night before, he fell in a tub after his nutritionist gave him a drink and told him to drink it. Ronnie admitted that he did not know what substances was in the drink, when asked if it was diuretics.

Also, Ronnie believes that all sports should be on a level playing field. For example if in baseball not everybody uses steroids, nobody should. But in bodybuilding, since the majority use steroids, everybody should be allowed to use them to make the competition fair.

Many find it very hard to believe that a doctor would subscribe the amounts of steroids, growth hormone, insulin and other substances a bodybuilder would take to be the best of the best.

What doctor, especially in the USA and Canada would take this responsibility?

Athletes that competed in the Olympics, baseball, football and other various sports have been suspended and punished for the use of banned substances. Doctor’s have also been exposed for bad practices in the past when it comes to steroids.

Could it be the reason Ronnie said he was prescribed all these substances by a doctor was because he had a background of being a police officer?

Some doctors may subscribe testosterone to older men to raise their levels to a normal range, but anything over would definitely not be discussed.

It is known that Ronnie went to the limit on a number of occasions to prepare for a contest and this was surely not under the supervision of a doctor, rather he was guided by his various trainers.

If doctors could subscribe steroids solely to progress in sport, the majority of athletes in bodybuilding and fitness would immediately be waiting in line for their services.

It is a shame to hear these type of comments, they are very hard to believe and the legends of the sport must realize the younger generation of athletes and fans of the sport are not idiots.

Steroids, insulin and GH are still being purchased and produced through the black market.

Interviews like these can easily make a legend such as Coleman lose his credibility.