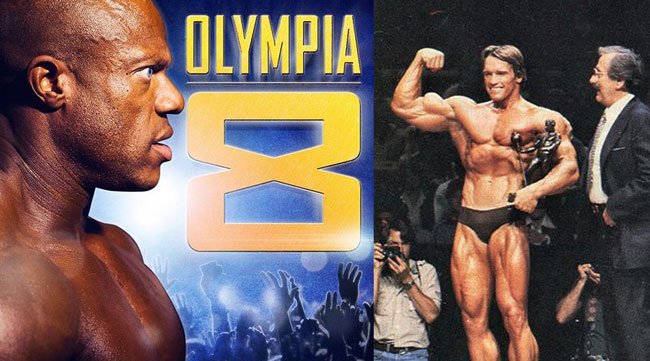 Will history repeat itself 40 years after Arnold made his comeback?

The 2020 Mr. Olympia is just around the corner. With everything happening in the world, the event is on track to take place.

Until the event takes place, it will be a nightmare for the men and women working behind the scenes.

The Covid-19 threat has forced the organizers to make decisions on a hourly basis and this will continue until they finally see the doors open for the event.

That is the reality of 2020, quick decisions to make things work.

As the big event gets closer, the media starts to get involved more and more, reporting on athletes and what is going on behind the scenes.

Focusing on the 2020 Mr. Olympia, this event will present some interesting story lines.

7X Mr. Olympia Phil Heath, will be making a return to the stage after losing his title to Shawn Rhoden in 2018.

Phil Heath and Shawn Rhoden were not present for the 2019 event. Brandon Curry was the best man on the day and he was crowned Mr. Olympia for 2019.

In 2020, Shawn Rhoden will again be absent while Phil Heath will be making a return, aiming to win his eight Mr. Olympia title.

Everything looks normal till now… but behind the scenes, certain events will be taking place that bring back memories of the 1980 Mr. Olympia.

In 1980, Arnold Schwarzenegger made a comeback after being away from the sport for a number of years. Nobody knew he was competing, until he walked into the athletes meeting with a film crew following him around.

Arnold was not a favorite to win, but when the smoke cleared, he was announced the winner in one of the most controversial Mr. Olympia events in the history of the sport.

There are many facts and stories about the 1980 Mr. Olympia, unfortunately they cannot be repeated in this article.

Not long after his victory, the film ‘Total Rebuild’ was launched. The documentary covers all the events leading to Arnold Schwarzenegger’s victory at the 1980 Mr. Olympia.

Fast forward to the 2020 Mr. Olympia, another competitor will have a film crew following him around at the event.

7X Mr. Olympia Phil Heath will be documenting his return to the bodybuilding stage with a mission to win his eighth Mr. Olympia title. If Phil Heath does win, he will be part of an elite group of bodybuilders that only include Lee Haney and Ronnie Coleman, both eight time winners.

What is also interesting is that Phil Heath’s manager is Dany Garcia. Dany is a IFBB Pro athlete, Dwayne ‘The Rock’ Johnson’s ex-wife and partner with Dwayne Johnson on the majority of his businesses.

Dany Garcia is said to be the brains behind Dwayne’s success. Phil Heath having Dany as his manager adds much more to his return to the bodybuilding stage.

Dany and Dwayne’s production company Seven Bucks Productions are involved in the documentary being produced about Phil Heath’s return to the bodybuilding stage.

Nothing is wrong with producing a documentary, but how will the other athletes feel with all the focus being on an athlete trying to win his title back.

If it was defending champion Brandon Curry walking in with a film crew, it would be something that all the competitors can relate to.

There have been other documentaries produced with defending champions losing, such as Jay Cutler in 2008 when he lost to Dexter Jackson.

Lou Ferrigno thought he would be winning the Master’s Olympia in 1994, but he was pushed to second by Robby Robinson. He produced a documentary called ‘Stand Tall’, covering the entire event. It had many similarities to ‘Pumping Iron’.

There are many similarities to Arnold winning in 1980 and Phil Heath making a return in 2020.

The star power behind Phil Heath will be very powerful. Dany Garcia knows the IFBB Pro League very well and Dwayne Johnson watching closely behind the scenes will be another major factor.

Many believe that Phil just has to look decent on stage to win his eighth Mr. Olympia title.

Phil only missed the 2019 Mr. Olympia in comparison to Schwarzenegger who returned after a five year absence.

During his time away, Phil Heath had to have major surgery immediately after the 2018 Mr. Olympia when he was defeated by Shawn Rhoden. Many believe that he will still have problems in his abdominal area.

Brandon Curry will be ready to defend his title against anybody, but unfortunately controversial decisions have been made in the past and he knows this.

Warning to the Mr. Olympia Judges and Olympia Delegates

The bodybuilding media and fans expect the judges to judge to event fairly, regardless of the star power working behind the scenes.

It’s very easy to make a bad decision when we talk about judging such a prestigious event.

Unfortunately, some people are impressed by a certain athlete or an event that takes place leading up to the event, which can hinder their honest judging process.

The judges and delegates must treat all athletes as equal and ignore what is happening behind the scenes.

Evolutionofbodybuilding.net has total faith in the work that the Olympia staff are doing and they will surely not let the nightmare that happened 40 years ago happen again.

On the positive side of things, the Olympia team of organizers now perfectly well what happened in 1980. The bodybuilding world still talks about the most controversial Mr. Olympia ever.

While they know camera’s will be following Phil Heath around, the organizers will surely keep an eye on them to make sure it does not get out of hand.

Good luck to Brandon Curry and the rest of the competitors for the 2020 Mr. Olympia. May the best man win fairly.

Seven Bucks Productions announced today they will executive produce “The Untitled Phil Heath Story,” a documentary film that will unveil the extraordinary life story of seven-time Mr. Olympia, Phil Heath, as he rises through the ranks, battles the scrutiny of the media, and takes on bodybuilding’s scariest foes. All while standing on the brink of becoming the greatest Mr. Olympia champion to walk the earth.

Written and directed by award-winning Canadian filmmaker Brett Harvey (Inmate # 1: The Rise of Danny Trejo, Ice Guardians) the film chronicles Heath’s extraordinary comeback journey as he battles his way back to the 2020 Olympia stage after a two year hiatus, in an attempt to reclaim his throne and cement his legacy among bodybuilding’s all-time greats. Heath, who claimed the title of Mr. Olympia every year from 2011 to 2017, is now plagued by injuries that come with 18 years of physical and mental sacrifice. Adding to the challenge of his comeback is COVID-19 and its looming implications on his training schedule and the Olympia event itself, presenting an entirely new dynamic to the hill that Heath must climb, as he once again stands on the edge of bodybuilding history.

“As a fellow bodybuilder, I am endlessly in awe of Phil’s abilities and unprecedented career,” said Executive Producer Dany Garcia. “Not only is his physique iconic but his work ethic, mental persistence and relentless commitment are simply unmatched in the sport. I am excited to be collaborating with Phil, alongside our partners, to tell his story with conviction as well as to bring an authentic glimpse into his world as he cements his legacy.”

“Phil is one of the greatest bodybuilders of all time and when it’s all said and done, he could become the greatest to ever step on stage,” said Executive Producer Dwayne Johnson.  “For good reasons, his nickname is “The Gift” and his bodybuilding surname is “the Dream Killer”. This is going to be fun to produce. I can’t wait.”

“I’m thrilled to partner with Brett Harvey and the Seven Bucks Productions team whose creative minds and trust make them the ideal partners to finally share my story with the world. I look forward to offering unprecedented access as I compete in yet another Mr. Olympia and using this opportunity for self-expression and honesty to allow my fans around the world to finally understand who I really am,” said Phil Heath.

“It’s a rare opportunity to step inside the personal voyage of an elite athlete who has been as dominant as Phil Heath,” said Brett Harvey.  “Even more rare is the ability to do so while he battles back from injuries and attempts to alter the course of bodybuilding history within the landscape of a world pandemic.  I’m intrigued to be joining Phil’s fascinating journey.”