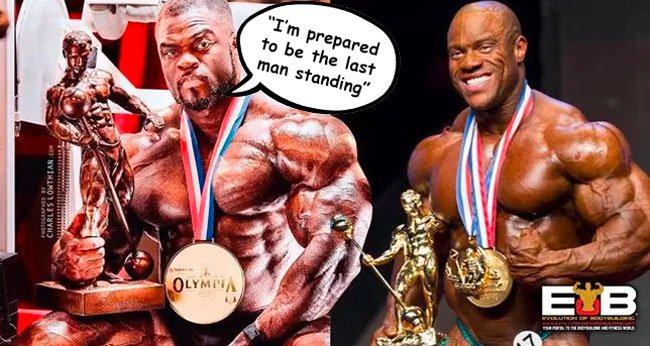 “I will be the last man standing” – Mr. Olympia Brandon Curry.

The build up to the 2020 Mr. Olympia has already started to heat up in the last couple of days.

Since the announcement that 7X Mr. Olympia Phil Heath is returning to the stage to win his eighth Mr. Olympia title, the level of excitement has risen to new heights.

Immediately after he confirmed his return to the stage, Phil Heath was interviewed by a number of media outlets.

Some media outlets have already started a negative campaign against Heath, rather than celebrating the return of the 7X Mr. Olympia Winner.

Evolutionofbodybuilding.net on the other hand is looking forward to the celebration of the best athletes in the world taking to the stage for a great competition.

Phil Heath has already started his campaign with a great interview with Dan Solomon.

Some of Phil’s comments were:

“The world will see a healed Phil Heath” – Phil Heath

“Champions do Champion shit and don’t need motivation from anybody.” – Phil Heath

Not long after, the reigning Mr. Olympia Brandon Curry started to appear on the majority of bodybuilding media.

Brandon was always a gentleman in all his interviews and handled the news about Phil Heath in a very professional matter.

In one of his best interviews with Fouad Abiad, Brandon Curry started to loosen up and start to show his game plan.

Brandon also had some interesting comments:

“I’ve been in this sport a long time, so I understand marketing. You can’t market a seven-time Mr. Olympia and not mention the possibility of getting eight. You gotta go with that marketing strategy, and that anticipation for him tying the record. That makes it exciting. That’s no disrespect for me there, that just makes sense. My job is make you forget about that whole campaign.” – Brandon Curry

“Phil Heath is paying attention to me” – Brandon Curry

It is very funny (in a good way) how Brandon gives a very polite answer and then at then finishes off by saying “My job is make you forget about that whole campaign.”

With Phil and Brandon already trading words, finally we might have a new rivalry in the sport since the Kai Greene – Phil Heath days.

During the interview, Brandon admitted that he and Phil will be in the final callout.

At the same time Brandon said “I’m prepared to be the last man standing”.

Brandon again said that he is very happy have the opportunity to compete against Phil Heath as a defending champion, but when the smoke clears, he expects to be lifting his second Sandow trophy.

We can expect more great comments from both these champions in the near future.

Mr. Olympia Brandon Curry is all smiles over the news of Phil Heath’s Olympia return. “I’m prepared to be the last man standing”. — Video clip courtesy of #OlympiaCountdown the new weekly show devoted exclusively to bodybuilding’s most prestigious event. #Olympia2020